(AFHSF) It’s been a buzzing 2015 already around the Bay Area for celebrating humanitarian design, in nonprofit and private practice alike! Here we touch on the panels, parties and fora highlighting great work by architects, planners and engineers for San Francisco and Oakland, and Haiti as well.

Among the San Francisco urban planning think tank‘s recent lunchtime fora was an evaluation of the city’s less-dense neighborhoods for development opportunities on February 3. Sunset District Supervisor Katy Tang remarked that even the quieter parts of town could “pull their weight” against the city’s housing crisis, and introduced initial studies of underutilized “soft sites” (see Land Use Objective 1, p.67, of the Sunset District Blueprint (PDF)). Amanda Loper of prescient social housers David Baker Architects discussed a menu of community-scale interventions towards this end (see their Toolkit for Designing Density (PDF)), and Gil Kelley of the SF Planning Department highlighted neighborhood engagement and support efforts like the city’s Invest In Neighbors initiative.

R. Thomas Jones, AIA, reprises his role moderating conversations among architects of successful sustainable urban housing models for San Francisco. The 2015 series kicked off on February 3 with special needs housing by Herman Coliver Locus Architecture: St. Peter’s Place (Richmond District, developmentally disabled residents), Bishop Swing Community House (in SOMA, for chronically homeless adults), and 1100 Ocean Avenue (near Balboa Park, for TAY, transitional age youth, and low income families). Each project was developed collaboratively between architects and housing developers with a sense of community in mind for these three very different neighborhoods. The sensitivity of these designs is phenomenal, and results from resident engagement and earnest discussions of needs – at Bishop Swing, for instance, fearing a familiar SRO Cabin Fever effect of punched windows, HCL principal Robert Herman, FAIA, highlighted their use of full-height windows to deliver access and association with the neighborhood outside. 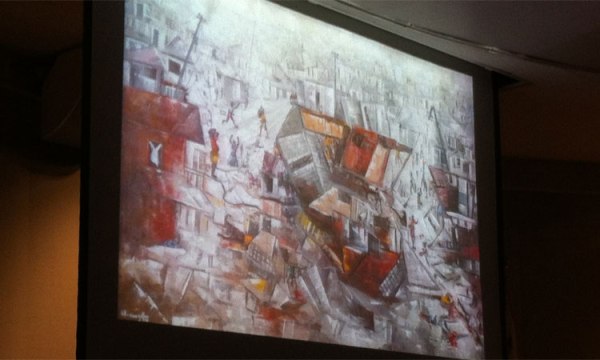 The Earthquake Engineering Research Institute naturally has a strong presence here in Northern California, and has had a longstanding relationship with Haiti’s recovery efforts – including the coordination of the first teams of seismic professionals to evaluate damage and building failure. On February 5, EERI convened members with extensive firsthand experience working to rebuild the Caribbean nation, moderated by Tim Hart of the Lawrence Berkeley National Laboratory.

The presentations were a mix of sobering, fascinating and hopeful news. Architect Martin Hammer, of Builders Without Borders, opened with an abstract painting he felt captured the chaos of Port-au-Prince post-quake, during an EERI inspection, and proceeded to deliver a sweeping account of the recovery effort. Hammer touched on the perpetual dysfunction, on experiments with rice straw, on a heartbreaking exclusion of Haitian architects and designers, on an ambitious school project mired to a standstill. Brian Tucker of GeoHazards International focused on future seismic risks in Haiti (Cap Haitien toes an offshore faultline that could potentially chase an earthquake with a tsunami), and GHI’s preventative initiatives in several of the villages along the north coast – an effort whose success depends heavily on local leadership. KPFF’s Ben Biddick shared on his work in Haiti with Build Change to reform building practices and  building materials, in the face of economically-driven pressures, and the progress gained through their homeowner-driven model of engagement, and structures education in plain Kreyol:

On Thursday, February 12, SPUR drew hundreds to residential West Oakland to celebrate the launch of their third office. The party was hosted by sculptor Bruce Beasley at his studio/expansive outdoor garden just a few blocks from West Oakland BART. SPUR pulled all the stops, bringing in local musicians, and local eats from the iconic likes of Tina Tamale – and of course there was bike parking and beverages, amid pristine, larger-than-life sculptural works-in-progress.

Newly-elected Oakland Mayor Libby Schaaf welcomed the attendees, and welcomed SPUR’s contribution to Oakland’s pursuit of regionalism and “prosperity for all.” (a new meme for the city?) SPUR Oakland Director Robert Ogilvie shared a few words of gratitude and anticipation for the office, to temporarily reside at the Oakland Impact Hub; Ogilvie goes into greater depth on the office’s values and initial approaches in this month’s issue of The Urbanist.