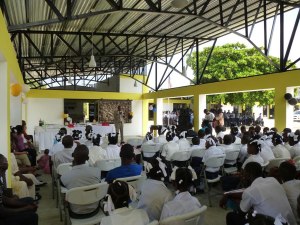 Last October, the second phase of a school opened in the Bel Air neighborhood of Haiti’s capital, Port-au-Prince. The new spaces – four classrooms, a kitchen and multipurpose dining area, an admin building and a composting toilet bloc – were nestled beneath a dramatic single-pitch roof and impermeable vaulted ceilings. The corrugated uppermost plane deflects beating sunlight and encourages air to flow between it and the vault, thereby whisking heat away in a fashion fit for Caribbean classrooms.

These are modest details by some standards, and yet they showcase an international standard of achievement possible in a place where everything that can go wrong, does.

It’s all the more astonishing then that Ecole Nationale Republique d’Argentine Phase 2 – a more ambitious program than the interminable two-year development of its seven-classroom structural retrofit predecessor – was completed in nine brisk months.

“Phase 2 was my child,” says Natalie Desrosiers, who has just completed her service to Architecture for Humanity – Haiti (AFH) as its construction services director. She oversaw outreach personnel and procurement, managed schedules and execution, filed progress reports and met with the stakeholders. “I watched it from the starting sketches to the opening ceremony.”

Natalie doesn’t purport to be fluent in English, though she could fooled just about anyone in that regard. Reviewing the school project over Skype, Natalie draws a blank on the translation for a large cookpot. I assure her there wasn’t really a common English word for that. Unconvinced, Natalie proceeds to describe why the kitchen needed special attention.

“One portion of the counter needed to be lowered from about 65 cm to 30 cm so they could easily pull the bowls to the ground.” Feeding 1,000 students isn’t exactly a walk in the park, but, thankfully architects were in the position to make life easier for the school, its students, and its community. “And storage,” Natalie adds. “They needed a place to keep the 50 giant bags of rice that were delivered each week. The Director asked that the eating area be open – a multipurpose place to eat, play, and have ceremonies.”

Funded by the Clinton Foundation and Boeing, Phase 2 of the Argentine school opened on October 30, 2014

Natalie, second from left, assists the Ecole Argentine’s 2014 ribbon cutting with colleagues, builders, faculty, and the Minister of Education

The school’s opening ceremony included a flag raising, speeches, and songs and dances from the students

AFH accommodated these requests. Such design modifications amounted to the greatest challenges of Phase 2 – a small miracle for a Haitian construction project in a disaster recovery Red Zone.

Of course any project conducted by  Architecture for Humanity is completely open source – right down to design documents and regular project progress as collected for partner and public consumption on the Open Architecture Network. Upon reviewing the development of each phase, the sequel feels like a dream:

So what had changed between Phase 1 and Phase 2?

“Those last few months everything fell into place – we had put together an amazing team and a common vision. Argentine 2 was a new way of doing things! We created new standards for schematics, drawings, presentation, quality assurance and control, constructability, new procedures…things were tighter. We had different types of [internal] meetings.”

In other words, AFH Haiti had tackled the kind of codification which had eluded them growing from a one-person staff to a thirty-person staff, and navigating a cascade of unanticipated and barely surmountable challenges. In 2014, there was at last a critical mass of wisdom, and the line to follow became clear. Phases were crystallized and tracking solidified, also due in part to program management migrating from AFH’s San Francisco headquarters to the field office.

Of course news hit in November that the field office would close.

“Now,” Natalie sighs, “hopefully, the people who were part of that team can carry on in that way,” employing the lessons for whatever comes next for each of them. There’s a good chance the former team members, nationals and foreigners alike, will continue working in Haiti for other organizations.

Artist sketches for school doors, above, and finished work, below 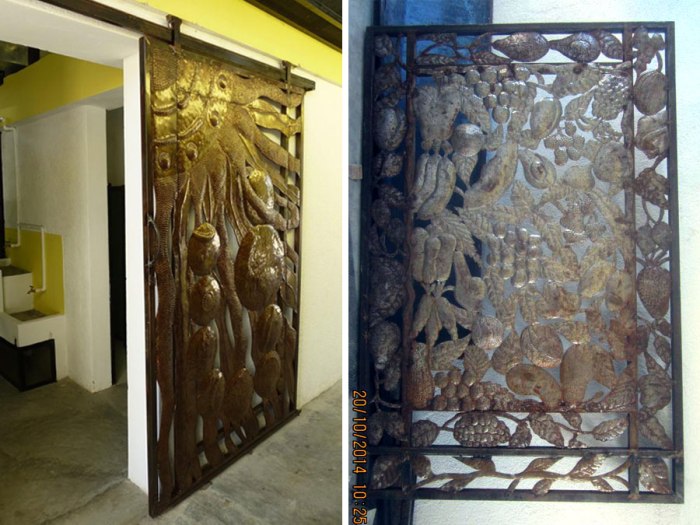 A Haitian national herself, Natalie studied and worked in Santo Domingo, Dominican Republic, before January 2010 brought her home. She initially worked for UNICEF in their recovery efforts, and joined AFH in 2011, first as a volunteer, then a Design Fellow, then staff.

“I learned a lot about site supervision at UNICEF, and learned more at AFH,” she tells me. “It’s unbelievable how the more you want things to change, to employ easier techniques, the more difficult it gets to see it through.”

Even after five years and $13 billion in aid, the Argentine school is a rare achievement for Haiti reconstruction. Country-wide, very little can be built, schools, housing or otherwise, as systemic challenges continue to plague recovery from every angle.

Land tenure issues are accountable for much of the hold-up. Identifying who owns what can be an impossible task. For that reason, the projects that AFH took on, starting back in 2010, first underwent land title verification as part of their feasibility analysis.

The next tallest hurdle to reconstruction is the enforcement of building codes. Since the earthquake, Haiti has adopted new codes to follow – but the policies have no teeth without an effective inspection system. Joachim Dieudonne, a journalist for Le Nouvelliste, touches on the bureaucratic quagmire practically encouraging illegal construction across the country.

It’s not for lack of builder compassion, defends Natalie.

“You simply cannot do things right without that discipline.” The fact is, workers need to get paid, and the boss foreman (traditionally employing the dubious title of “engineer”) commands the payroll.

The trade’s the thing

“It’s frustrating,” Natalie says, to see capable builders fall back to corner-cutting. “Every chance I get I take time and tell people why something wrong is wrong, why it must be corrected.” This level of instruction is important, and yet has a future in Haiti. Natalie is now investigating how to move the industry forward, code enforcement or no.

A good place to start is launching a certified trade school; while code enforcement is out to lunch, training, or “formation” in French, is not off the table.

“The few trade schools now in Haiti are not at the level they need to be. I’ve visited two in Port-au-Prince where the tools aren’t modern, and there’d be one piece of equipment for 50 students.” Classes are often held under hot tents. The ‘engineer’ instructors teach outdated techniques: a masonry class would work with outdated mortar ratios, and recommend hand-building CMUs. “A machine can churn out 100 units per hour; by hand it takes 2-3 days.”  At one workshop, the trainer clearly had no idea what he was talking about.

A nationally recognized certification, Natalie thinks, will carry weight. She was recently awarded a Fulbright scholarship based on her observations, and on her hands-on, comprehensive education of building and engineering principles that she employed with AFH’s construction outreach team.

The construction outreach program, launched in 2011, enlisted Haitian builders as liaisons between the job sites and AFH’s field office. Natalie’s first and foremost job was overseeing the 10 or so overseers, relaying international standards of construction and ensuring they’re rigorously employed on site. Over time, and after daily site visits, the outreach officers developed a knowledge base to become superior job foremen.

“We wanted to make sure they were more than just the Haitian enginuer. We’d promote the officers to an ‘Associate Engineer’ title, where they would take charge of site management and construction administration paperwork.

She regrets not having even more time to work with them, but recalls a recent invitation to see an alum’s job site and independent operation.

“He had everything. It was…remarkable to see him grow his company and put his lessons into practice.” Marc Henry was now working on a handful of residential projects.

“This will sound cliche – I didn’t use to believe it but now I do. Success starts with oneself. The things I’ve been able to share were VALUABLE. Because we did something GOOD. We’ve touched workers and contractors. Seeing the practice carried on, I’m speechless. That I’m able to witness it.

“And I’m sure I can do that for more people now.”

As far as entrepreneurial alumni go, Marc Henry was not an isolated incident.

“I visited Gerald Jeanty too. He doesn’t have a physical office or anything, but he’s working! Running around between a few sites…all you need is a cell phone and a laptop!”

Today, in Haiti, the rebuilding beat goes on. With people like Natalie dedicated to the best work possible, and extracting ever better achievements in the midst of chaos, we may be in for some positive infrastructural surprises yet down that long and bumpy road.