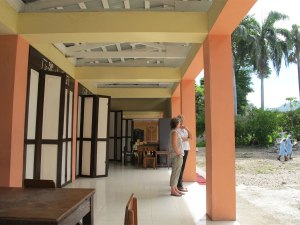 (Students Rebuild) You may have heard that January 12, 2015, was the five-year anniversary of a devastating earthquake in Haiti that took thousands of lives and brought down countless buildings across the island nation. But the disaster also inspired the launch of Students Rebuild, an initiative believing that young people can make big difference strengthening communities around the globe.

I’m happy to see Students Rebuild is thriving, connecting youth and enabling change with each new challenge, and happy to say that the first challenge, the Haiti Schools Initiative, was no exception.

Starting way back in 2010, I sent field reports to Students Rebuild on behalf of Architecture for Humanity (AFH), a nonprofit organization of designers dedicated not just to building back better, but building for the long term, and empowering communities to adopt the best practices and revolutionize their construction industry.

That first year, participating classes digitally met the Haitian students whose schools they were helping rebuild – a series of videoconferences organized by Global Nomads Group shared cultures, humanitarian efforts, and profound personal stories. In the following two years, the first phases of each school were completed – but that hardly means the impact of the Haiti Schools Initiative has ended. In fact, you could say it’s just begun.

Here, we look back at at the Students Rebuild Haiti schools – and what’s been happening on campus in 2014. Our next Haiti post will talk more about the very real and lasting impact that only young people around the world, in banding together as Students Rebuild, could make possible. 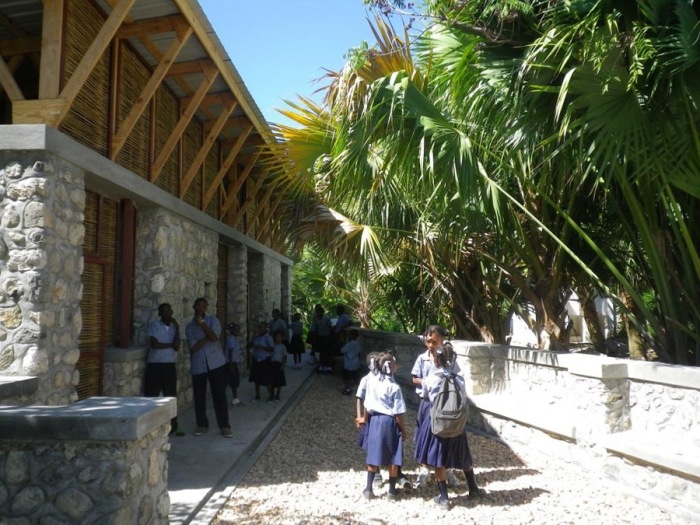 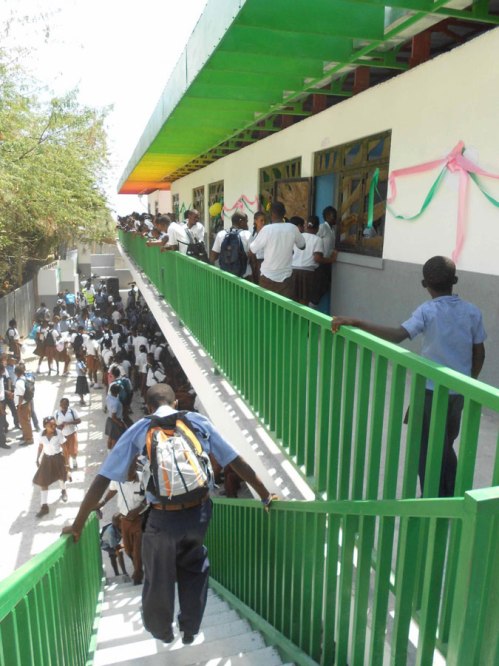 February 2012: In Montrouis, a fishing town on the Bay of Port-au-Prince, Collège Mixte Le Bon Berger opened its first phase to great fanfare. In many ways, the Montrouis school became the flagship for Architecture for Humanity’s reconstruction values: construction training and oversight of local builders guaranteed the best quality of building; and innovation – from local metalsmiths’ doors and windows, to civic art installation, to an eye-popping celebration of sun shading – showcased just what could be done in Haiti by Haitians, with the support of seasoned international designers. The Montrouis school would go on to be recognized by the Haitian Ministry of Education as a national asset. Image: Gerry Reilly July 2012: Graduation Day for many of the girls from École Elie Dubois vocational school who participated in the first Students Rebuild videoconference sessions. The girls helped Architecture for Humanity identify the needs and opportunities for the new school, which led to the design and construction of this dynamic cafeteria space to replace the beloved cafe brought down by the 2010 earthquake. With walls that open, this space is more than a dining hall – it can host ceremonies, lectures, community meetings, and craft fairs. Image: Kate Evarts 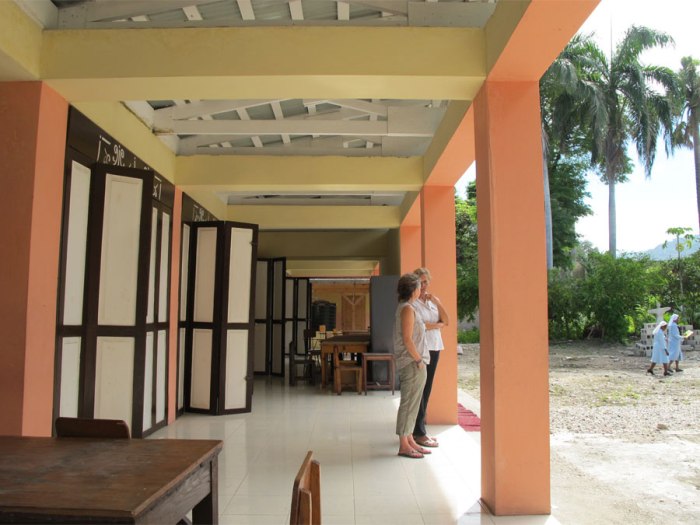 In October, 2013, AFH’s Haiti office director Kate Evarts brought Stacey and I to check out the new Elie Dubois campus. The cafe building looked regal, reflecting the 100-year-old school’s tradition in a dynamic fashion, and was (both thermally and colloquially) very cool. Image: Karl Johnson 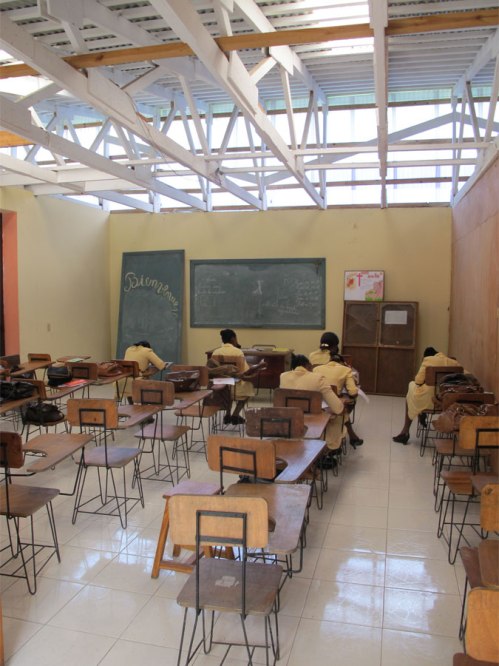 …Part of the space was blocked into classrooms until Elie’s Phase 2 – historic preservation of an earthquake-damaged heritage building – is completed. More on that below. Image: Karl Johnson 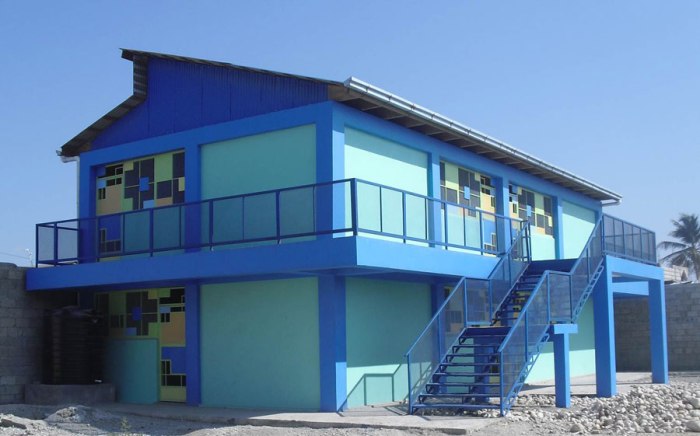 November 2012: The first new, permanent classroom bloc is completed at École Baptiste Bon Berger in Pele, Port-au-Prince. The construction team navigated harrowing difficulties of a compact site, high water tables, and bandits. Pele is one of the densest and most notorious slums in Haiti, and it took tremendous coordination between the designers, the buliders and school headmaster Chedrick Caneus to ensure a safe environment during construction. Image: Natalie Desrosiers 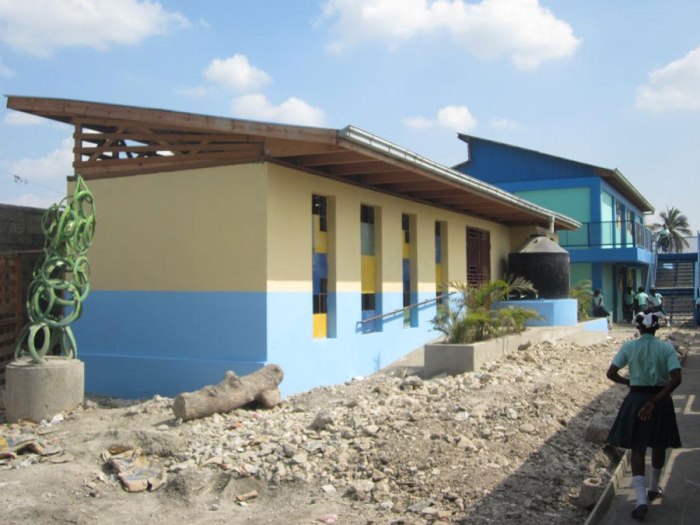 March 2014: Difficulties didn’t let up for the Pele school’s Phase 2 bathroom block. Increased gang activity threatened project completion – until the contractor volunteered to do the work during the night! Here the bathroom bloc has just been completed – it uses a “bagasse” composting system, and collects, filters, and stores rainwater for handwashing. Sanitation nonprofit GiveLove has trained school staff on the compost system that will sterilize waste produced by the school and turn it into a marketable plant fertilizer. In the foreground, a piece from AFH’s Haitian Civic Arts program has found a home among the other plants surrounding the bloc. Image: Stanley Joseph 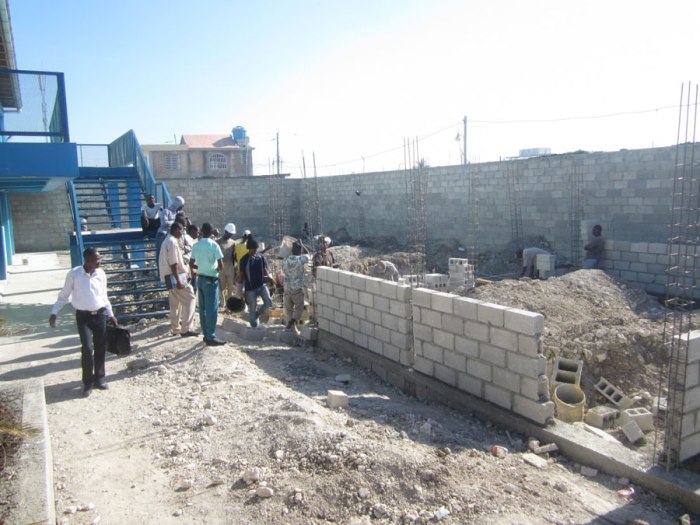 …In 2014, the Pele school has also begun building a new classroom bloc! Construction will continue past the closure of AFH’s Haiti office, but AFH has sent advice and recommendations for the school to ensure the new construction matches the quality of the first new classroom block facing it. Image: Stanley Joseph 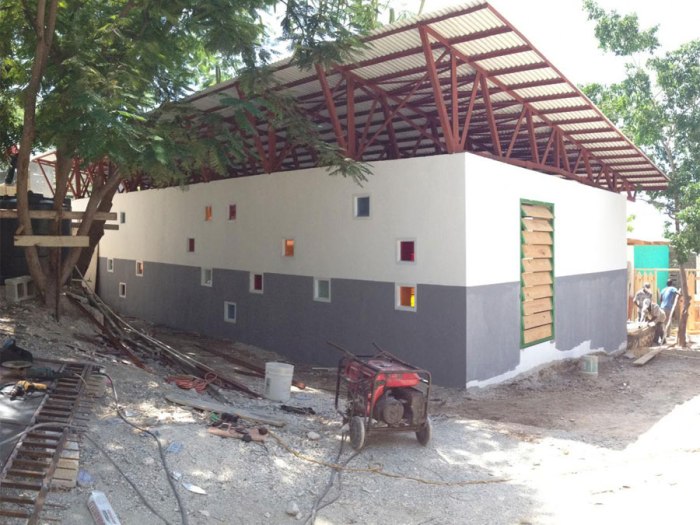 September 2013: Montrouis school’s Phase 2 included additional classrooms, an administrative building and rebuilt bathrooms. AFH architects again got playful with the classroom design – because why should classrooms be boring?? – and window shading to keep the hot Caribbean sun at bay while letting the cool breezes in. Image: Natalie Desrosiers 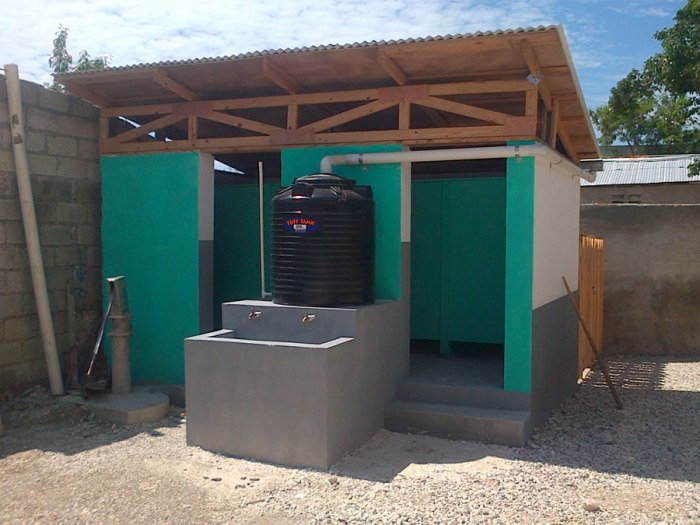 …the new bathrooms at Montrouis showcase the achievable potential for every school toilet bloc in Haiti: secure construction, rainwater harvesting for hand washing, and space to create compost. The result looks modest, but is a revolutionary approach to waste in Haiti, where pit latrines and flying toilets are the norm. Montrouis school’s compost system is bagasse, like Pele’s, and GiveLove is on the scene again to train school staff on the straightforward but specific composting procedure. Image: Jacques Nixon 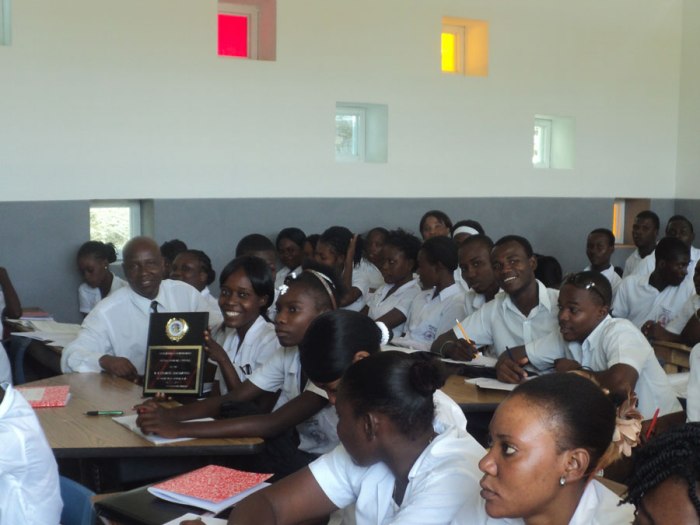 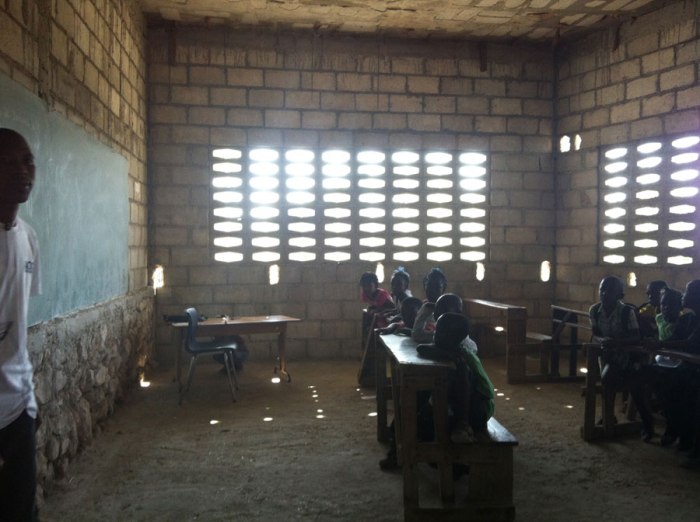 It’s important to remember what the Montrouis school looked like before Students Rebuild. Not only will the new buildings stand up to future earthquakes, but they in turn build a higher standard for educational spaces. We hope this standard can make its way to every corner and island of the country – but it will still take many years of jumping high hurdles to do so. Image: Fleur Messer 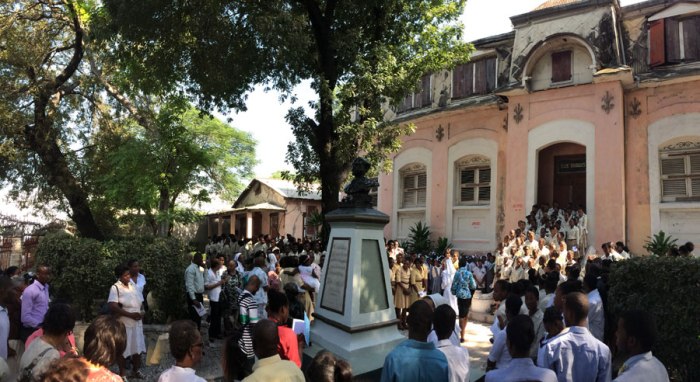 In December, 2013, the Elie Dubois girl’s vocational school in downtown Port-au-Prince turned 100. The event was so momentous, Haiti’s largest newspaper covered it. Students, alumni, and parents gathered here before the original schoolbuilding to honor its history – yet this historic building is about to open a new chapter, and spring back to life. Image: Kate Evarts 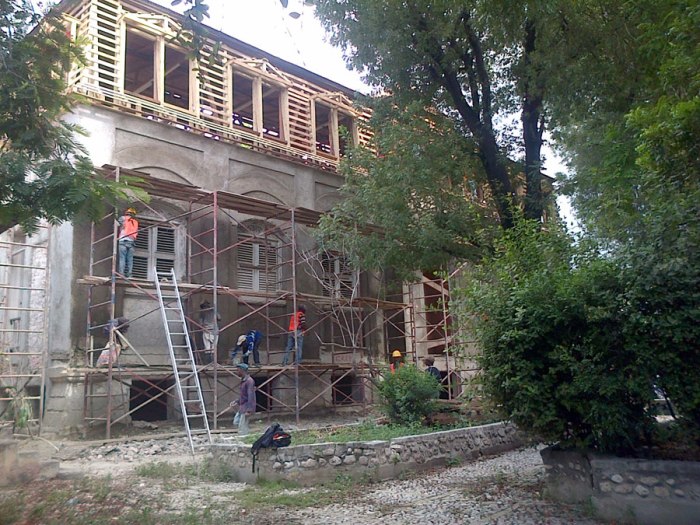 In 2014, construction got underway to preserve Elie Dubois’ surviving historic building. Work includes renovating the iconic mansard roof (shown here through the trees), replastering the exterior, and applying a structural fiberglass layer to existing walls. This wall thickening procedure has never been done at this scale before in Haiti, but such an historic school as École Elie Dubois certainly warrants special treatment. Image: Jacques Nixon

Thanks for taking a walk with us through Students Rebuild’s first Challenge! The impact of the reconstruction of these four schools didn’t end at their opening, and won’t end at their Phase 2 completion, either.

Instead, the efforts made by brave middle and high school students across the globe in 2010 have set the stage for an architectural renaissance in Haiti – where Haitian builders continue to learn and employ the best construction practices, with help at first from skilled foreign NGOs like Architecture for Humanity.

And we’re beginning to see these builders graduate and go into business for themselves; more of that in Part 2 of our Haiti Five Year Anniversary coverage!