Linus Lam is the remaining active founder the first Canadian Architecture for Humanity chapter, in Vancouver. In the past four years, the Vancouver Chapter has worked on everything from self-initiated projects, hosting talks and conferences, to collaborations with the City of Vancouver and the Haiti Rebuilding Center. We spoke with him recently on some of the opportunities and challenges of their work.

AFH Headquarters: Thanks for taking some time to chat with us. From what the Chapter has online it looks like you guys are involved in quite a range of things. Care to share the Chapter’s story – how it got here?

Linus Lam: We’ve been active for the past three plus years. We’ve done events and projects of various nature, from self-initiated projects like talks and exhibitions to collaborations with other local entities, including the City. But I’m sure you completely understand everything is volunteer driven, all the time is donated by designers – that’s always been the case.

When we started the chapter way back, it was actually a very challenging time. Nobody we were working with had ever done anything like that. Also [HQ is] in the United States, we’re in Canada, there were a number of organizational aspects and we had to figure a lot of things out for ourselves – there was a bit of a learning curve but it was all rewarding.

So when we first started we focused on doing projects that were relevant to the local community, to create partnerships and get to know the community a little better. Throughout, if volunteers had an idea, they were encouraged to bring it up so the group could give feedback and make something out of it, if applicable.

Prefab 20×20 booth at the 2009 IDSWest expo. The competition and booth for winning entries were both executed by AFH Vancouver

A few things came out of that policy. We did a small talk and exhibition on density in Vancouver, our first and only art sale fundraiser was brought up by volunteers. That’s how we started, with self-executed initiatives that gave us an excuse to meet interested individuals.

Later on we started working with other groups – some successful, some not so successful. A successful one remains to be a collaboration with the City of Vancouver. On one hand they need help with some initiatives they have on the table – they have limited resources on some of these projects. On the other hand it aligns with some of the things we value, the volunteer-based values. We did a couple of exercises in Chinatown – one was a very basic facade rehabilitation project.

Another one which we’re still working on in conjunction with Vancouver’s Chinatown Revitalization Strategy. That’s the one thing that we’re still engaged in, depending on availability of volunteering designers. That project started more than two years ago – it’s an on-off relationship, right now it is on a small hiatus…. There were a number of challenges on this project – local community groups dynamics, city and community support, budget, and now we need to be sure we have the qualified volunteer designers able to work on it.

While pursuing that we have another project still ongoing. You may have read about it – the repurposing of sail fabric from Canada Place.

HQ: I did notice that.

LL: It’s fabric material repurposed from Canada Place, from a tensile structure. When that building was updating to new fabric, they were trying to find ways to gift it instead of disposing of it. Since then we’ve been trying to find the right channels. From local projects to other nonprofits, in and outside of Canada, to design showcases. We’ve wanted to get designers working with it creatively.

HQ: How did the Haiti aspect of that come about?

LL: One of our volunteers, Brett Ferguson, has been working on site with the Haiti office. He’s our liaison on the ground. Every time he comes back to Vancouver he loads a new suitcase of material. The pledge is that if he needs more material for his projects there it’s his to take.

LL: Oh it’s quite a bit. I helped him pack last time. The last batch was a decent 25′ by 100-120′ of material. This is something we actually had discussed with Haiti and Headquarters way way back when the material was donated. I talked to Frederika [Zipp, then Chapters Coordinator] about it, who emailed Eric [Cesal, then Haiti Regional Program Manager]. There was a challenge of materials coming to Haiti [by ship] being stalled at customs; it would have been a lost cause getting materials there and not having funding to get through customs.

Since then times have changed a bit.

HQ: How has Brett been able to use the fabric in Haiti?

LL: He’s designed an awning system. It can only complement the structures he is working on as the local community prefers structure that’s more “concrete”.

HQ: You should know that the Denver chapter is looking for fabric for an outdoor classroom…

LL: Yes let’s talk! They should know it’s a previously used material. We’ve been taught how to handle it and wash it. The sizes vary, and they’ll have to be creative and work around all that… 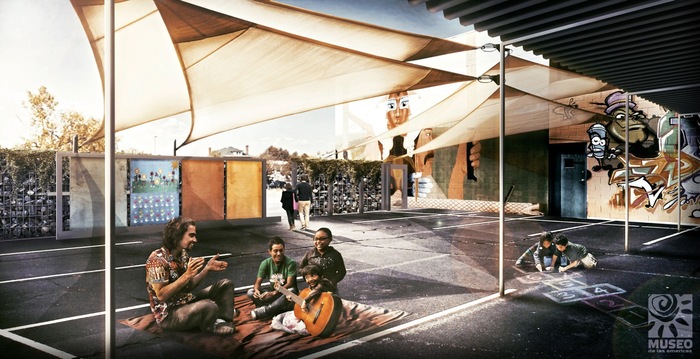 HQ: Let’s go back to when you mentioned working through Canadian procedures. Have you been able to work with the Toronto chapter at all to get established and nationally recognized?

LL: Yeah! From time to time they would email me about things, like the differences between Not For Profit and Charity.

LL: Well, the question was in context of issuing tax receipts – for that you have to register for Charity status. It’s a more involving process. The lawyer I spoke with said it would take 8 – 12 months to get.

Becoming a Not For Profit is more of an application, like registering for a business number. I told them the benefit of being a nonprofit is from time to time there would be applicable grants.

However in the past couple of years there’s limited funding available. For new groups it is also challenging as they look at the group’s portfolio of work. I would know because grant orgs would usually give me a call to let me know what’s available. It’s always a good thing to know availability of grant funding but having the human resources to apply for those grants is just as critical.

HQ: With regards to the City of Vancouver–who approached who to start that relationship?

LL: The genesis of that was – in the first year when we set up the Chapter we hosted a design competition (Prefab 20×20). Subsequently we showcased our entry at a local trade show.

We got some exposure there. One nonprofit from the Chinatown area was curious to see if we could do a collaboration. That’s how it began. That nonprofit was helping the City of Vancouver with facade renovation projects in Chinatown. They were looking for volunteer designers. They were facilitating the city of Vancouver and the local building owners to take advantage available facade grants, and we were the design consultants for that job. Later on the City approached us – they had some project ideas they were looking at right behind the building we were working on (Market Alley).

HQ: And it continues to this day?

LL: I’d say the relationship is fairly steady. When they have certain initiatives or certain ideas they would always send us an email, “an opportunity is coming up, would you guys be interested,” like that.

For the Chinatown Revitalization Initiative. We helped them with a mapping and a visioning exercise. Right now there’s a public space initialization on the table – but it’s all still fairly conceptual. When we get to more concrete stages we’ll be responsible for securing funding–that’s been clear.

Right now we have a strong concept, the city is interested, we’re short of appropriate volunteers at this time – we will need to get the [design and construction] industry involved to get funding.

HQ: Sounds like things are rolling. Where do you see the Vancouver Chapter heading from here – what’s an ideal place for you guys?

LL: We’re transitioning to an new group of young energetic people. I was one of the five founders – I’m still around but the rest have moved on to different cities or have burned out. So I’m getting a new group going with a balanced set of skills. Right now we’re about 50 percent there, but already we’re seeing changes.

Two volunteers are running communications – social media and web presence. Another is working on membership, connecting designers who want to volunteer. Another is focusing on project liaisons.

On average I’d hope for 15 – 20 hours a month. In the past we’ve had different types of volunteer with different levels of energy and endurance. I am a strong believer that for something to go far, you’d need a larger group of people that’s committed and consistent.

We’re slowly getting there, but we simply don’t have enough human resources at five people. Ideally I’m looking to get to twelve. That’s my hope. we’ve talked about what we can do once we get there. We’d like to have an educational component, with access to local professional communities, a speaker series that we can provide a learning credit for.